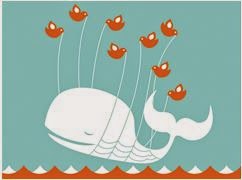 The year was 1965 and you young tykes may have missed out, but for us old fuddy-duddies, though, the robot in the TV series “Lost in Space” said it best, “This does not compute.” Things may have changed in the world of television sitcoms, but my guess is that writing now is still pretty much the same as writing then. Some of the best error messages of all time still seem appropriate to describe the error analysis process, at least for me.

The higher-order concerns are behind us and now and it’s time in the tutoring session to move on to the later-order concerns. It’s time to actually read the paper. This is when I imagine I turn into the Twitter fail whale. You know the error message that appears when the Twitter service is too overloaded to work. The whale appears and the little Twitter birds
carry him (her?) off into the distance. Something tells me they aren’t going to come to my rescue and I’ll need to determine if the writer has been careless, or if they don’t understand the rules of grammar and punctuation. Where are my Twitter birds when I need them? I’m terrified of the paper that’s so overloaded with problems I won’t know where to start.

At this point, my only purpose in life is to avoid system shutdown—my second greatest fear. Is there a 12-step program for that? How to fix tutor shutdown problems. Troubleshooting tutor shutdown glitches.  Breathe. Breathe. I
imagine checking the clock and seeing our appointment time is done. Alright, time to stop fantasizing (evading) and get to it. My saving grace will be the grammar handbook that I’m sure our writing center has available. It does, doesn’t it? I foresee becoming hard-and-fast friends with that handbook, since I can spot errors, but may not know how to explain them. I’m looking on the bright side, though, there’s no chance I’ll be mistaken for the grammar police.

Popular posts from this blog

By A.R.Micheletty December 17, 2007
While I admit I was once intrigued by the prostitute-consultant analogy, not by what Scott Russell had to say about it but by some of the ideas we threw around in class the other day, I can honestly say, now, that I am beginning to move away from the metaphor. While I once connected prostitution and the writing center through their brief meetings and levels of intimacy, I now question the nature of those meetings and the levels of intimacy available, and like David said in class, I agree that the comparison is a stretch. Here’s where I struggle with a connection between meeting a stranger, a prostitute, for sex, and meeting a consultant at the writing center. Although the ‘client,’ ‘student,’ or whatever, meets with a stranger for a limited period time to meet a specific desire, the level of intimacy between sex with a prostitute and a writing consultation differs. It is my experience that consultations between peers can be genuinely intimate as one discusses personal thoughts—there i…
1 comment
Read more

Survey of Hourly Wage and Compensation for Writing Center Consultants

By Clint Gardner November 30, 2006
I have posted a poll in the IWCA forums: IWCA Forum: Peer Tutor => What do we call ourselves: the poll! It is a part of an earlier discussion that kind of petered out about the titles used for writing center workers. Please take a moment and vote! If you don't have an account on the forum, you can register for one by clicking on the "Register" link (next to the rocket icon in the top-right of the page.) Don't forget to state your institutional affiliation when you request and account. (That's how the IWCA Forum keeps out spam accounts.)
Post a Comment
Read more